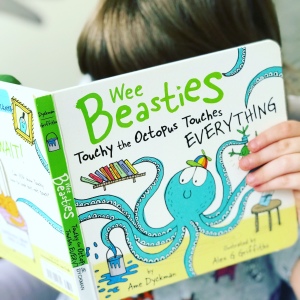 Hello, friends! Our book today is Wee Beasties: Touchy The Octopus Touches Everything, written by Ame Dyckman and illustrated by Alex G. Griffiths, third in one of our favorite series.

Much like his predecessors, Roary the lion and Huggy the python, Touchy the octopus has a quirky bad habit. Specifically, Touchy likes to use all eight of his tentacles to touch the things he loves, even when those things are delicate or dangerous. Like his friends before him, Touchy must learn the power of self-restraint – with the guidance of the helpful reader, naturally!

Let me tell you, the Wee Beasties have been a SLEEPER HIT in our house since we read Roary and Huggy, so Touchy was welcomed with open arms. The repetition-driven and interactive plot formula remains the same, letting this new friend slide in effortlessly with his peers. So same are the wonderfully colorful and dynamic illustrations, which have the added mania of Touchy’s jumble of arms extending off and on the page as they explore. One notable difference is the climatic interactive portion: instead of modeling the acceptable behavior by engaging with the character on the page, children must show restraint themselves by placing their hands behind their backs and NOT touching. It was a little tricky for JJ – who was so familiar with the interactive portion of the last two books – but well-done, especially as it introduces a new tool/strategy for encouraging self-control. The length is fine for all ages, and JJ was delighted – another Wee Beasties winner, and Baby Bookworm approved!