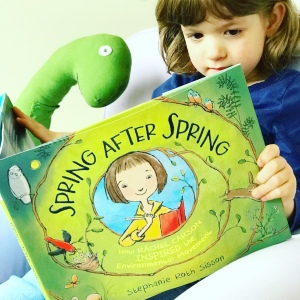 Hello, friends! Our book today is Spring After Spring: How Rachel Carson Inspired The Environmental Movement by Stephanie Roth Sisson, a look at the revolutionary scientist and author.

Every morning, Rachel awoke to a symphony of song. Birds, chipmunks, insects, and all manner of furry, finned, or winged creatures filled her world with calls, chirps, and caterwauls. Rachel loved to learn about them, reading books and exploring the environments near her home, making notes and observations on everything she saw. Heading off to school, she was sure she would be a writer… until she glimpsed the microscopic world hiding in a drop of water, and became fascinated with biology. After a career of success as a researcher and author, Rachel turned her attention to something big: the steady silencing of the naturesong she had cherished as a child. Uncovering one of the major contributors of this ecological shift, toxic pesticides, she published the book Silent Spring, a groundbreaking and controversial work that changed the minds of the country, and would go on to create an entirely new movement of environmentalism.

There are very few works like Carson’s Silent Spring, which led to a major sea change in public opinion on environmental conservation and protection; for instance it – along with Carson’s testimony before Congress – led directly to the formation of the EPA. And Sisson’s work here does a wonderful job of showing both the early influences on Carson’s love of nature, her research, and the impact of her masterwork, as well as why the environmentalism movement was such a necessity in its time. There are a few areas that feel skimmed over (Carson’s struggles with being a woman in mid-century STEM, the lack of public interest in conservation before her book, etc.), but there are also wonderfully rich details, such as the onomatopoeic birdsong and the bold flowchart that describes how chemicals can devastate an ecosystem (note: this does depict some deceased animals). Sisson’s illustrations convey the tone perfectly, and the length is good for even smaller bookworms. A lovely introduction to an often-overlooked figure, and it’s Baby Bookworm approved!

(Note: A copy of this book was provided to The Baby Bookworm by the publisher in exchange for an honest review.)