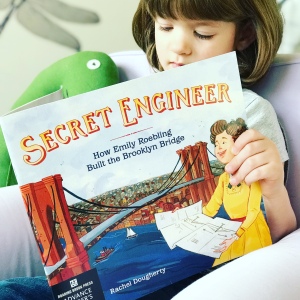 Hello, friends! Our book today is Secret Engineer: How Emily Roebling Built The Brooklyn Bridge by Rachel Dougherty, an awesome look at a woman ahead of her time.

As a child, Emily was fascinated by science and math, pursuits rarely encouraged for girls in the 1800’s. She eventually grew up to marry Washington Roebling, a fellow lover of knowledge and the son of famed engineer John Roebling. When John sent his son to Europe to learn about new technologies for building bridges, Emily joined him and studied the techniques as well. And when John passed away during the early stages of construction on a bridge – the biggest and most advanced of its kind at that time – her husband took over, only to fall gravely ill as well. Though she had never received a formal education in engineering, Emily became Washington’s right hand, conveying his instructions and notes by day and teaching herself engineering by night. Over the next ten years, Emily became an expert on the bridge: conducting negotiations, answering questions, and allaying doubts on her own. When the bridge was finished, she became the first person to cross it, proving that her and her husband’s work had built a structure that would last lifetimes: the Brooklyn Bridge.

Hands up: who’s ever heard of Emily Roebling? Fortunately, this loving biography shines a light on her remarkable efforts to build one of the world’s most beloved bridges, a technological marvel in its time. The text can be a bit dense at times, but only to provide important context on the complexities of the bridge, and science-minded bookworms will love the mini-lessons on the bridge’s construction and design. In this respect, the art does a marvelous job as well, nimbly integrating blueprints, engineering terms, and mathematical concepts with art that is instructional, inspiring, and often both at once. The length may be best for slightly older bookworms, but JJ enjoyed it and so did I. A wonderful profile of an unsung hero, and it’s Baby Bookworm approved.

(Note: A copy of this book was provided to The Baby Bookworm by the author in exchange for an honest review.)