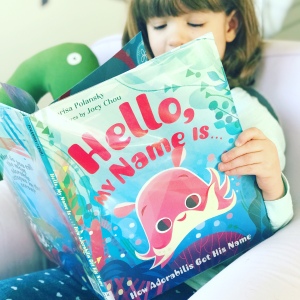 Hello, friends! Our book today is Hello, My Name Is…: How Adorabilis Got His Name, written by Marisa Polansky and illustrated by Joey Chou, an imagining of how a sea creature’s unique name came to be.

A small pink octopus is placed into a tank, and being a friendly sort, calls out a hello to the other inhabitants. Immediately, the deep sea creatures that make up his tank-mates (among them a yeti crab, a six-filled shark, a fangtooth, a mimic octopus, and more) approach the newcomer, commenting on how small and cute he is. They ponder aloud what he will be called, causing the little octopus confusion – called? The others explain that the humans that care for them give the creatures names, usually alluding to their appearance or special skills, such as parachuting from higher rocks, but begins to seriously worry about what his name will be. At last, a scientist appears and calls him by name: Adorabilis. The other creatures agree that this is a perfect name for the little guy, and the neighbors settle into their new life together.

This was – as the subject matter would imply – very cute, and a cool way to teach children about both the newly discovered Adorabilis species and how creatures can get their common names. The illustrations are darling, and bring the tank’s inhabitants to life, adding character and color (another reviewer did note that these species would all-but-impossibly share the same tank, so diehard marine life-enthusiasts may have to suspend their disbelief). My only issue is that the title gives away the ending! I wish they had kept the subtitle a little more vague, which would have added a fun layer of suspense to the story. As it was, knowing what the animal’s name is from before the first page diminished the urgency of the octopus’s anxiety. Otherwise, the length was great, and JJ enjoyed it. A fun tale that introduces some nifty creatures, and it’s Baby Bookworm approved!