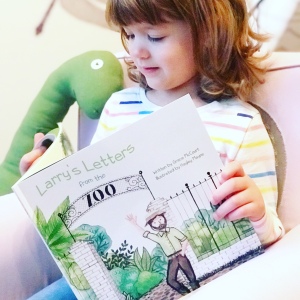 Hello, friends! Our book today is Larry’s Letters From The Zoo, written by Grace McCourt and illustrated by Hayley Mayne, a look at one zookeeper’s tricky decision.

Larry the zookeeper is celebrating the zoo’s birthday by building a special, brand-new enclosure. When he’s finished, it’s perfect – but now Larry has to choose which animal shall live there. All the animals write Larry letters, describing why they want it: the elephant feels it should be hers, as she’s known Larry the longest; the giraffe thinks he should get it, as he is the tallest and can help guard the zoo. The anteater, the monkey, the snake – everyone pleads their case. So who will Larry choose?

I have some mixed feelings on this one. I was enjoying it through the beginning, which uses a structure similar to The Day The Crayons Quit. The animals’ hand-written letters, each with a unique font and character voice, are wonderfully paired with some charming illustrations to introduce an array of creatures. But the ending is… bold: once all of the animals’ arguments are made, the book asks which animal the reader would choose – then abruptly ends. The narrative itself offers no solution to Larry’s dilemma, and while I respect the approach of reader participation, to offer no hint of resolution leaves the story feeling a bit unfinished. This is especially true because some of the animals had excellent reason to want the new home (the mouse, for instance, was homeless), so leaving the story on a big question mark is kind of unsatisfying. However, it can also be argued that it allows young readers to write their own ending, and if this is the intent, I only wish clearer direction had been given in that regard. Overall, an excellent start but a rather shaky ending; still, for the wonderful art and entertaining animal voices, we’re still going to call this one Baby Bookworm approved.

(Note: A copy of this book was provided to The Baby Bookworm by the author in exchange for an honest review.)