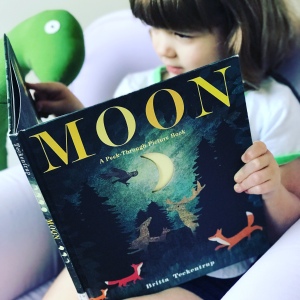 Hello, friends! Our book today is Moon by Britta Teckentrup, a peek-through books that provides a look at nocturnal wildlife and the the phases of the moon.

All around the world, nighttime animals look up at the sky and see the same things we often do: the stars, the Northern Lights, and of course, the moon. As the peek-through cutouts show the reader a waxing then waning moon, the art and rhyming text brings us around the world to see what nighttime nature is like in the desert, the jungle, the poles, the ocean, and more.

Tree, a book from the same series, is one of JJ’s favorites, so we had high hopes for this one. And we were pleased with many elements: the art is phenomenal, giving a look at dozens of nocturnal species and their habitats by setting up gorgeous moonlit scenes. The texts flows well and is easily read aloud. But two things did irk me: one, I wish the phases of the moon had been labeled or at least described more in the text; despite being the assumed focus of the book, very little attention was paid to the changing moon in the story. Also, there was a weird section in the center in which the moon phases abruptly switched to out of order, going from a full moon immediately to a new moon. It was a little jarring, especially considering the careful progression of the waxing moon up until that point. Otherwise, the length was fine and JJ enjoyed it. This one is definitely worth a read, but if your baby bookworm is looking for a more accurate look at our moon, you’ll have to look elsewhere. But still, but the lovely look at nighttime animals, it’s Baby Bookworm approved!