Hello, friends! Our book today is Waiting For Pumpsie, written by Barry Wittenstein and illustrated by London Ladd, an uplifting story about the integration of the Boston Red Sox.

In 1959, the Red Sox are the only Major League Baseball team not to have integrated, twelve years after Jackie Robinson’s debut with the Dodgers. To Bernard, a young black boy from Roxbury and a die-hard Red Sox fan, this is mystifying. He knows what he reads in the papers (that the owners don’t want a black man on their team), and from his family’s yearly game at Fenway (where they are treated with contempt and open racism despite being fellow fans). “Change is coming real soon,” advises his mother, and sure enough, there’s talk of a talented minor-leaguer named Pumpsie Green. He looks sure to make the roster, but the owners hold him back at the last moment, claiming he’s “not ready”. However, after fan protests and a drop to last place, Pumpsie is brought up to the big leagues. Bernard and his family are overjoyed – but will the team truly give Pumpsie his opportunity to shine?

Powerful. Following Green’s integration through the eyes of one of his young fans, the tone and language of the text deftly strikes a delicate balance between reality and hope. Era-typical vernacular is used, including terms like “colored” and “negro”, used both as slurs but also generic terms (Bernard refers to his family and Pumpsie as “colored”, for instance); it’s jarring and uncomfortable, as it should be, and sets the stage for both Pumpsie and Bernard’s triumph of spirit at the end. Bernard and his entire family are heartwarmingly endearing characters, especially his fierce, hopeful mother and sage and kind father. Ladd’s gorgeous illustrations capture every scene of joy, anger, sadness, and pride. It’s a bit on the longer side, and the content is for the more mature bookworm, but JJ and I loved it. This is a moving tale about the importance of diversity, and how it can change lives in the biggest and smallest of ways. Baby Bookworm approved!

(Note: A copy of this books was provided to The Baby Bookworm by a representative of the author in exchange for an honest review.) 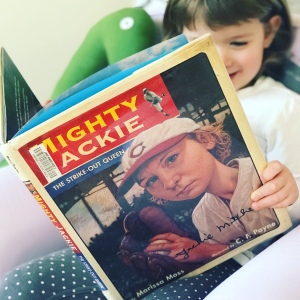 Hello, friends! Our book today is Mighty Jackie: The Strike-Out Queen, written by Marissa Moss and illustrated by C.F. Payne, a girl-powered true story of the one of the first female professional baseball players.

On a sunny day in April of 1931, a small minor league team called the Chattanooga Lookouts were preparing for an exhibition game with one of the best major league teams in the country: The New York Yankees. Reporters and fans filled the stands, many to see the Lookouts’ pitcher: Jackie Mitchell. As a little girl, Jackie was told by nearly everyone that girls couldn’t and shouldn’t play baseball – but her father believed in her, as did her neighbor Dizzy Vance (a professional pitcher himself), so they trained her. Jackie practiced relentlessly, and at the age of only seventeen, found herself in front of a jeering crowd, up against one of the most talented ball clubs in history. But what Jackie did next was extraordinary – she struck out Babe Ruth and Lou Gehrig back-to-back, stunning the crowd and making baseball history.

Very, very cool. I was vaguely aware of Mitchell, and was pleased to hear about this book when it was recommended to us so that we could learn more (as depressing postscript, Jackie’s success embarrassed many of baseballs higher-ups, and her contract was voided a few days later by the baseball commissioner, who declared the game “too strenuous” for women. Mitchell continued to play for small clubs, but retired six years later, tired of being used as a novelty). The story on its own is uplifting and empowering, and centers on the theme that greatness takes hard work and belief in oneself as well as opportunity. The illustrations are lovely, using a nostalgic, realistic style that fits the humble and determined protagonist. A good length, and JJ was enthralled by the end. An awesome story about an inspiring female athlete, and it’s Baby Bookworm approved!

(Thanks to Christine Nault for the recommendation!)